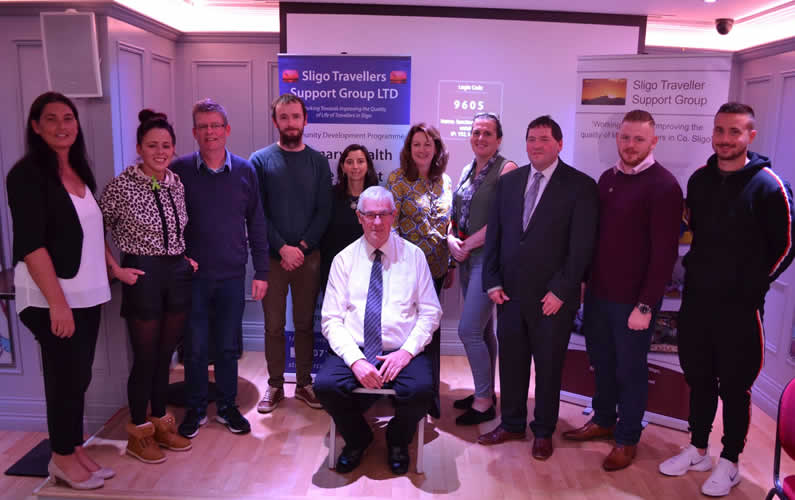 There was a packed room at the Riverside Hotel in Sligo on World Mental Health Day Wed Oct 10th for a conference called “Travellers and Mental Health: Crisis and Change”. The event, now in its second year, and hosted by Sligo Traveller Support Group saw a wide range of speakers address the issue of mental health and suicide within the Traveller community. Opening proceedings Chairperson Pat Hegarty welcomed those in attendance who included members of the Traveeller community, health, mental health and family services, members of other Traveller groups, local politicians and Bishop Kevin Doran. Manager of Sligo Traveller Support Group, Bernadette Maughan addressed the issue of mental health on a national level and emphasised the message of taking care of your mental health or you wont be in a position to support others. Martin Jones, manager of the HSE Alcohol and Substance Misuse Counselling Service highlighted some of the supports that are available within the HSE and how to access them. Allyson Coogan and Maria Carnicer from Exchange House Ireland gave an account of the Traveller focused and culturally appropriate mental health service that they offer. Allyson Coogan highlighted in particular the impact discrimination has upon the Traveller community in relation to poor mental health and the importance of the family in recovery and treatment. She also mentioned the necessity for Traveller focused mental health services who are more aware and tuned in to issues that may occur in the community and have an adverse impact on mental health.

Bridget Kelly from the National Traveller Women’s Forum also discussed the need for culturally appropriate services and impact of discrimination and inequality upon mental health and the multiple levels of inequality women in the community feel as Travellers and as Traveller women. On describing the circumstances of Traveller women Bridget said “We are survivors and we have to be”.

T.J Hogan, accommodation worker with the Irish Traveller Movement talked about how his own family had experienced the mental health crisis directly talking about the various relatives he had tragically lost to suicide. T.J also spent time explaining the impact that poor, inadequate and inappropriate accommodation has a severe impact on the mental well-being of the community and the need for Travellers to get actively engaged and take on roles of leadership on issue whether it is mental health, accommodation or education. Unless more Travellers get involved in taking action and raising their voices no change will come.

Eileen Flynn, a Traveller activist and community development worker also drew upon the issue of accommodation stating that while caravans are place where many Travellers wish to live, they cannot be considered homes without the basic services that go with making that home habitable such as access to water, electricity and heat. Eileen has stated that Travellers “shouldn’t just be ‘getting by’ anymore and that she saw it as vital the need to support the Travellers that choose “education, marry outside the community, or are gay Travellers”.

To conclude proceedings, Sligo Rover striker, Mikey Drennan, spoke with moving honesty about his own battles with depression, describing the isolation he experienced as a young player in England, and emphasised the need to talk and seek help. Mikey mentioned how he himself had talked to a number of councillors before he was able to recover properly and the importance of small actions when you begin to feel down like taking a walk.

Commenting on the day organiser Jamie Murphy from the Sligo Traveller Support Group said “ we are really happy with how today went. It was very well attended with a good cross section of people but we don’t want to be in a position where we have to put on such talks. We need urgent action in tackling the crisis and we all have a role to play in this. Whether its local authorities delivering on their Traveller accommodation obligations in partnership with the Traveller community, reintroducing Traveller supports in the education system which were savagely cut by governments and the introduction of a Traveller specific mental health budget which would all be steps in tackling the crisis.”